APEC in Tomsk: the true story 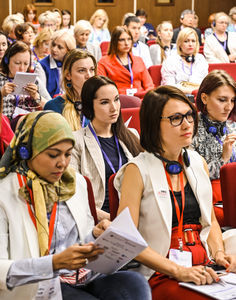 Summer is meant for joy and leisure, this is the time when we can finally relax and have some rest... But is it really? In June, we were too busy to even update the news feed! However, our great APEC events in Tomsk are over now, so we are ready to share this experience and tell how we managed to complete it successfully.

Tomsk differs from other Russian cities, especially judging from the number of foreign visitors. These are mostly students who came from abroad to get higher/additional education in our university city. On June 13-15, however, we hosted not students but true professionals: representatives from business and governmental authorities from more than 10 APEC economies and other countries. They had a weighty reason for coming to Tomsk – participation in international events within Asia-Pacific Economic Cooperation.

As a host, we took up both professional tasks and so-called “household” activities. Interpreters from Lingvista provided:

-       Consecutive Chinese <> Russian interpretation at business meetings of our partners from Chinese Taipei with business and government representatives in Tomsk and Novosibirsk.

Moreover, our experienced interpreter Olga guided the guests around Tomsk, and volunteers (university students from faculties of foreign languages and international relations) fulfilled all the current tasks, such as interpretation at a pre-meeting of the Forum’s speakers, interviews for Russian journalists, local partners’ production presentations at coffee breaks etc.

Our guests’ trip to Siberia was not limited to participation in the official APEC events; along with the sightseeing tour around Tomsk, there were also a welcoming dinner at Stroganina-bar and a culinary workshop about how to make traditional Siberian dumplings. Volunteers from Lingvista were also there to help Russian and foreign partners communicate. We did our best to note every participant’s special needs: for example, a participant from Chile was more comfortable speaking Spanish than English, so Natalia, the Spanish-speaking volunteer, was always by her side. Another participant from Malaysia lost her luggage during her long flights, and Julia the volunteer helped her buy some necessary items and showed the biggest trade center in Tomsk – everything at once. Two participants from the Philippines discovered that their mobile phone chargers don’t comply with Russian power outlets, so volunteers brought the guests to an unexpected electric shops tour.

Besides, this has not been without complications. Before departing from Indonesia, one of the key Fair speakers found out that the ticket she bought was from Jakarta to Moscow and not to Tomsk. It was discovered due to a happy accident, and we helped her buy the right tickets both ways at the last minute.

In the end, both APEC events turned out positive and effective! There are many news reports related to the Forum and the Fair, published in Russian and foreign social media; you are welcome to check out videos downloaded to our YouTube channel. This is not everything what’s left by the big APEC meeting in Siberia: everybody gained their own experience and good impressions from new places, useful contacts, foreign cultures and – hopefully – our sincere Siberian hospitality!