FIFA Confederations Cup 2017: behind the scenes 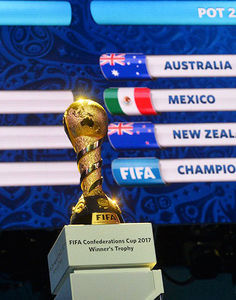 The greatest football event of 2017 has come to its end: winners found their trophies, fans from all over the world came back home. As for us, we’re drawing a line under one of our most extraordinary projects. For several years, Lingvista has been providing extensive support for a team of British journalists, our partners shooting FIFA Football magazine in Russia. They really had lots of work during the Confederations Cup! So did we, and now we’re pleased to share our fresh impressions.

Bright reportages straight from the stadium are always attractive to the audience. When it comes to such a global event as the Confederations Cup, people become football fans everywhere, no matter if they were keen on sports before. Lingvista and football have been closely connected since 2011, when we first organized interpretation for filmmakers from London shooting Russian football clubs. This time, we undertook all the activities to organize their work in the Confederations Cup host cities: Saint Petersburg, Moscow and Sochi.

Our missions were truly various: we appointed interviews and meetings, got shooting permissions, organized reception at airports and taxi transfers. Each task had its own nuances: for example, the team needed a large taxi (minivan) because of massive cameras and equipment, and it was preferable to have English-speaking drivers to be able to discuss things right on the spot. Besides, the reports are not just about football. Russia was represented from different sides: the journalists went on a breathtaking rooftop tour in Saint Petersburg, interviewed a famous opera singer from the Mariinsky Theatre, visited a hospitable beekeeper’s honey farm and challenged themselves in the extreme Skypark in Sochi. It goes without saying that our interpreters and translators took active part in the project too. They performed interpretation at interviews with football players, World Cup ambassadors, volunteers and local people, and the translators created English subtitles for the videos afterwards.

The great football project brought us unique experience, while our British partners enjoyed the convenience of Lingvista’s organizational & linguistic support one more time.

Stay tuned and welcome to Russia for the World Cup 2018!