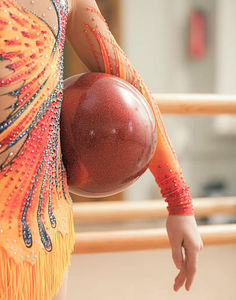 We have explored many interesting subjects while working with translations and studying facts from various areas. For example, we recently dealt with professional Olympic sport within one of our projects. Translation of interviews and records taken during rhythmical gymnastics trainings turned out to be a creative and tricky challenge - just as this impressive sport itself.

People in Russia became really interested in football lately, and the reason is quite obvious. We have already told about our work during the preparations for the Confederations Cup 2017 and World Cup 2018 and also mentioned that Lingvista had been a long-term partner of the British FIFA TV. This time, we discovered a new sport direction for our work, connected to one of the most popular and bright sports in our country - rhythmic gymnastics.

The foreign partner we have long been working with in audiovisual translation, requested us to translate interviews of young rhythmic gymnasts and their training records from Russian into English. Thus, Lingvista translators had not only to learn new special vocabulary related to gymnastics and ballet, but also to use their imagination. We worked on translation of source audio records without any video shown, so it let us discover peculiarity of each language. We may use one common word in Russian to say both "leg" and "foot", but which special one should be chosen in English? The same works for "arm" and "hand". What was meant during the training? We needed to guess, taking the context into consideration and relying on our imagination :)

Besides, informal spoken language translation differs much from subtitles translation of both TV series and tutorials. Informal speech is spontaneous, less consistent and logical: we start talking, then change our mind and the subject of speech itself. This can happen to anyone, not to mention a young trainer full of energy, willing to point out every mistake and praise young gymnasts at the same time. By the way, the trainer is one of the most popular award-winning world champions in rhythmic gymnastics of modern times. So, working on passionate athletes' speech took us pretty much time.

All in all, if you've got audio or video to be translated, feel free to contact us. We will tell you how much would the translation cost and estimate how much time would approximately be needed for completing the task. Moreover, we are able to estimate the approximate word count in media files. No, we won't count words one by one. It's a kind of magic we make ;)