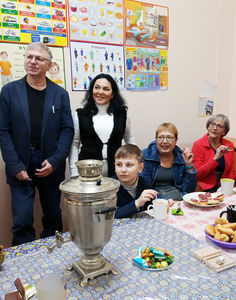 You may easily get from Europe to Russia by taking just one flight – there is a number of those heading to our country daily. However, the destination is still rather exotic for European travelers. Tourists explore Moscow and Saint Petersburg, but only the bravest and most curious ones make it to Siberia. Among them: one Italian family and two French mesdames not afraid of the frosty February and severe winter temperature around -40ºC!

…even though such weather wasn´t included into traveling plans, most likely. The family from Italy arrived to Tomsk not in the most appropriate season – some flights were delayed because of weather conditions just one day before they came. They had a safe trip luckily, and there was nothing to stop them from following the plan, a five-day city sightseeing tour included. Lingvista provided the family with services of an Italian <> Russian interpreter who guided them around and showed the city. The son of the Italian couple is going to study here in Tomsk, so he needed to visit the university to hold some meetings as well. The interpreter spent several hours a day with the tourists, being by their side to solve any daily life issue and tell facts from the rich city history. Great news: even the heavy frost did not scare the student-to-be and he is definitely coming back for study soon :)

Moreover, two mesdames from France came to explore Siberia this month as well. Our French <> Russian guide interpreter Mikhail drove them around Tomsk, but this was just a little part of their big Siberian travel. The French ladies went to the town of Yurga by train (around 100 km away from Tomsk) and then had to experience a typical Russian adventure: getting on a train during a short two-minute stop on Yurga station. Our client was a French travel agency with a representative office based in Moscow, and the managed was really worried if the travelers would have made it on time in the right direction. Lingvista offered an additional option: we found Elena, a French and English local teacher from Yurga, who was ready to meet the mesdames and help them out. The mission was just to point out the right train for them. However, it turned out much more interesting than anyone could expect! Elena and her students were very enthusiastic about meeting tourists from France, so they prepared well for this special occasion. The ladies were met at the station and then brought to Elena’s language school where they had welcoming tea instead of waiting for the train at the railway station. The kids even sang Les Champs-Élysées and La Marseillaise in French to an accordion! It was a surprise the French ladies could hardly expect :)

All in all, French learners from Yurga were happy to chat with native speakers, while the travelers definitely kept some warm memories from the trip. Would they want to come to Siberia once again in the future? Hopefully yes! Wherever you are, you may contact us and come to Russia without hesitation: Lingvista will provide you with interpretation services and a local tour guide speaking your language in any city of Russia and CIS countries.